(Updated March 11, 2021; 4:05 p.m.) The new music video of Filipino group SB19 featured an old map that was previously used to strengthen the Philippines’ claim over the West Philippine Sea.

SB19 released their new single called “What” last night, March 9. Its music video had gained more than a million views in less than 24 hours since it was released.

The hashtag ##SB19WhatMVOutNow used to promote the song also dominated the trending list of Twitter Philippines last night with more than half a million tweets or 684,000 tweets under its belt.

Amid the overwhelming support from their fans called A’Tin, one Reddit user noticed that a copy of a 300-year-old Philippine map was featured in the music video, just a few minutes after the song ended. 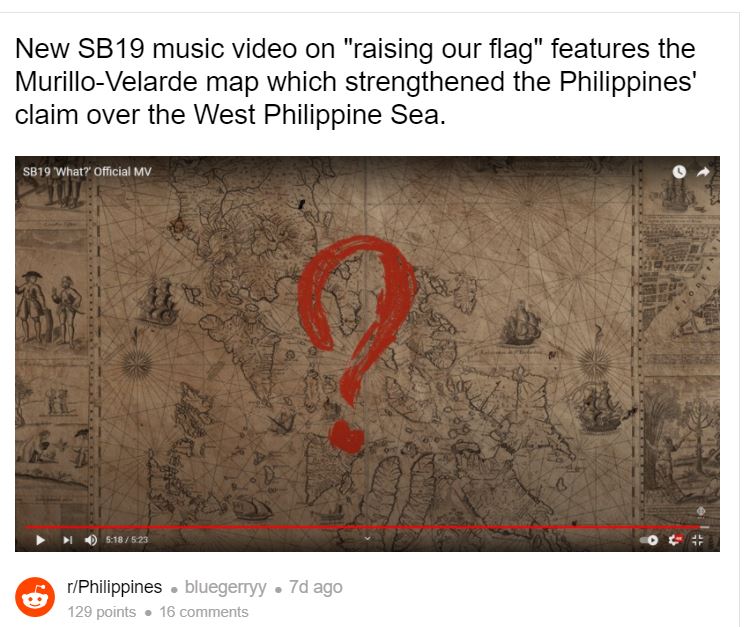 Called the Murillo-Velarde map, it was one of the pieces of evidence that the Philippines submitted to the United Nations Tribunal on the Law of the Sea in The Hague proceedings in 2015.

In 2016, the UN Tribunal ruled in favor of the Philippines and rejected China’s “nine-dash line” claim, which covers 90% of South China Sea.

The old map was commissioned by Fr. Pedro Murillo Velarde, a Jesuit priest, to a native cartographer Nicolas de la Cruz Bagay in 1734.

John Silva, an author and collector of historical artifacts, described the map in an article as “a large, sumptuous, sharp and detailed image of the whole Las Yslas Filipinas.”

The map was acquired by Filipino businessman Mel Velarde in an auction at the Sotheby’s London in 2012 for P12 million. He donated the map to the National Museum of the Philippines in 2017 as “a gift for the Filipino people.”

Under the Reddit post, most users pointed out that no evidence or proof can be used if the national government itself does not support it.

“No matter what maps we show up. Without backings from our very own f***ed up government. Every evidence we came up will be weak,” one user said.

“We got in a bad spot since we broke off with the US and sided with the Chinese,” another said.

One Reddit user, meanwhile, commended the five-member group for their efforts in raising awareness.

“In all seriousness though, a good effort to raise awareness on the significance of the Murillo-Velarde Map,” the user said.

SB19, who falls under the Pinoy pop or P-pop genre of Filipino music, explained in a statement that their latest track is about self-love and empowerment.

“‘What?’ is about self-love and empowerment. Each of us has our own flag. We should be proud of it and raise it as much as we can. As SB19 and as individuals, we know that we’re not the best at everything, but that shouldn’t stop us from what we want to achieve,” said lead vocalist Pablo.

The music video was directed by member Justin De Dios and the dance moves were choreographed by SB19 and Tank Bautista.

(Editor’s Note: An earlier version of this article indicated that the map was reportedly sold for P12 million by a Filipino businessman named Mel Velarde. This has been corrected to clarify that Velarde acquired it in an auction for P12 million.
Source: https://interaksyon.philstar.com/trends-spotlights/2021/03/10/187301/sb19s-new-music-video-features-historical-map-that-helped-west-philippine-sea-claim/
SB19’s new music video features historical map that helped West Philippine Sea claim was last modified: March 17th, 2021 by mvv
0 comment
0
Facebook Twitter Google + Pinterest

Chief Executive Officers of 4 Big Companies in The Philippines